Group Buys Alabama Abortion Clinic to Keep it From Closing 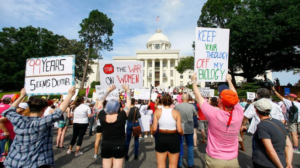 MONTGOMERY, Ala. (AP) – An Alabama-based abortion rights group received a flood of donations after state lawmakers in 2019 attempted to outlaw abortion. The group used the money to purchase the state’s busiest abortion clinic to ensure it stays open when then-owner retires.

The new owner is Yellowhammer Fund, a group founded to help low-income women access abortion. The fund announced the purchase of West Alabama Women’s Center on Friday, the one-year anniversary of the passage of the Alabama ban.

“I said this a year ago. What they didn’t anticipate they would do is help us increase abortion access in Alabama,” said Amanda Reyes, executive director of Yellowhammer Fund.

Last year, Gov. Kay Ivey signed into law legislation that would make performing an abortion at any stage of pregnancy a felony punishable by up to 99 years or life in prison for the abortion provider.

A federal judge has blocked the Alabama ban from taking effect while a challenge plays out in court.

— From ABC News & The Associated Press