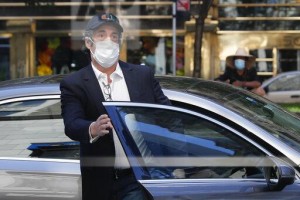 President Donald Trump’s longtime personal lawyer and fixer Michael Cohen was released from federal prison Thursday to serve the remainder of his sentence at home.

Cohen has been serving a federal prison sentence at FCI Otisville in New York after pleading guilty to numerous charges, including campaign finance fraud and lying to Congress. Cohen arrived at his Manhattan apartment building at around 10:40 a.m. wearing a surgical mask and a baseball cap.

Cohen’s release on furlough is part of an attempt to reduce the spread of the coronavirus in federal prisons.