A new mural that showcases Selma’s designation as the official Butterfly Capital of Alabama — is going up at a new green space — in downtown Selma.

The city of Selma is known for a great many things. And one of them — is for being the official Butterfly Capital of state of Alabama.

That designation is the theme of a new mural in the works at Pocket Park — by Lowndes County artist — and Selma native Vaughn Sims.

“That was initiated when I was a child here in Selma,” said Sims.

“I remember when that campaign was started in the mid 70s.” 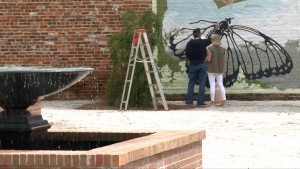 Sims says the designation also represents the community’s hope of repairing it’s tarnished image — after the turmoil of Voting Rights Movement of the 60s.

The butterfly is also a symbol of rebirth and change, as well as, a perfect example of something old and unattractive — being transformed into something new and beautiful.

“Butterflies are something everyone can agree on. But it has that aspect of change and renewal that Selma needed in the mid 70s,” said Sims.

Pocket Park is the creation of ArtsRevive. The Selma non-profit that uses the arts — to bring people together.

The park space used to be an old neglected piece of property. Now ArtsRevive is transforming it into something useful.

“Its just another way ArtsRevive opens up a space that used to be unattractive to community to come together.

The mural is expected to be finished in about two weeks.