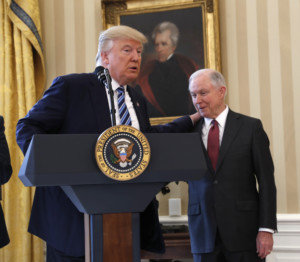 MONTGOMERY, Ala. (AP) — Jeff Sessions is pushing back at President Donald Trump’s criticism, telling Trump that he was “damn fortunate” Sessions recused himself from the Russian investigation.

“Look, I know you’re angry, but recusal was required by law. I did my duty & you’re damn fortunate I did. It protected the rule of law & resulted in your exoneration,” Sessions tweeted in response to Trump.

Sessions added, “your personal feelings don’t dictate who Alabama picks as their senator.”

Sessions has long defended the recusal but had largely avoided engaging Trump’s tweeted scorn as he emphasizes his continuing loyalty to Trump and his agenda. Sessions has gone on the offensive about the recusal, which drew Trump’s ire and has been a lingering obstacle as Sessions seeks the U.S. Senate seat that he held for two decades.

“3 years ago, after Jeff Sessions recused himself, the Fraudulent Mueller Scam began. Alabama, do not trust Jeff Sessions. He let our Country down. That’s why I endorsed Coach Tommy Tuberville (@TTuberville), the true supporter of our #MAGA agenda!” Trump tweeted.

Sessions was Trump’s first attorney general, a position he was forced to resign when his recusal from the Russian inquiry prompted a fallout with Trump. Sessions said he was required by law to recuse because he was a potential subject and witness since he had participated in Trump’s 2016 campaign.

Tuberville has made Trump’s belittling of Sessions a focal point of his campaign. Tuberville has begun airing ads featuring Trump’s criticisms of Sessions. One includes a clip of Trump saying if he could have one presidential do-over it would be to not appoint Sessions as attorney general.

“Jeff Sessions quit on the President and he failed Alabama. I’ll always have President Trump’s back,” Tuberville says in the ad.

Sessions, in a follow-up tweet, called Tuberville a coward for refusing to debate him and criticized his stance on immigration.