It has now been sent for autopsy to determine if it is that of 23 year old Steven Nichols.

Nichols had been missing since Tuesday night after he attempted to swim across the Cahaba River but went under and disappeared.

We’ll have more updates on this story as it becomes available.

Authorities in Dallas County are searching for the body of man who disappeared while swimming in the Cahaba River.

Search crews are dragging the Cahaba River — in response to the report of a possible drowning. 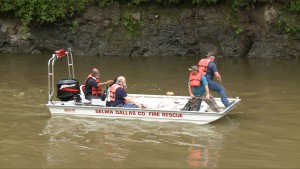 According to witnesses 23 year old Steven Nichols was trying to swim across the river — when he went under — and disappeared.

It happened at around 7:30 Tuesday night near the Elam Holley Park area of the river — just off Highway 22.

“We know he ain’t alive. I don’t believe he is,” said Raymond. “I’d like for them to find him on that bank down there somewhere, but I don’t think they will.”

ALEA’s Marine Patrol Division — along with rescue squads from Autauga and Elmore counties — have been called in to help with the search.

Trump lashes out at NASCAR, Bubba Wallace over flag, rope