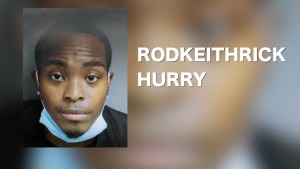 One man is dead — and another man is behind bars — following a shooting Thursday night in Selma.

Twenty seven year old Rodkeithrick Hurry of Selma has been arrested and charged with capital murder in the case.

The shooting happened at around 6 o’clock yesterday evening — on the 400 block of Lapsley Street.

The victim has been identified as 19 year old Napolean Ivory of Selma.

Chief Kenta Fulford say Ivory told police — that he was walking down the street with a relative — when someone drove up and started shooting at him.

Fulford says Ivory was taken to the hospital — where he later died.

“The victim was able to give us a description of the vehicle that was firing the shots at him while they were walking south on Lapsley Street and we located the vehicle at the local hotel,” he said.

Hurry is also charged with Shooting-into-an-Occupied-Dwelling. He’s currently in the Dallas Co. Jail — being held without bond.