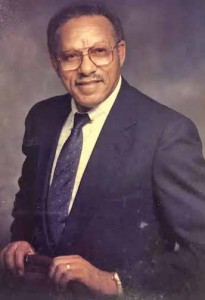 Photo from the City of Andalusia

The city of Andalusia has announced the death of Lewis Carpenter, who elected in 1984 as the first black member of City Council. He was 92 years old.

Carpenter was born in Crenshaw County on February 1, 1928. He was the fourth of eight children, and grew up in the Bullock Community just outside of Brantley. When he was 21, he moved with his parents to Andalusia.

He and his wife, Myrtice Bryant Carpenter, made their home on Lowe Avenue for 58 years until they moved to Opp Health and Rehab.

Carpenter joined Covington County Bank and worked there in several roles over a 33-year career. He also worked as a reserve deputy with the Covington County Sheriff’s Office for many years.

In 1984, he became the first African American elected to the Andalusia Council, serving three terms His election gained nationwide attention, and his story was featured in Jet magazine.

Carpenter was elected during at-large voting, meaning he had to run city-wide, and defeated a sitting council member to win his first term.

— Information from the City of Andalusia