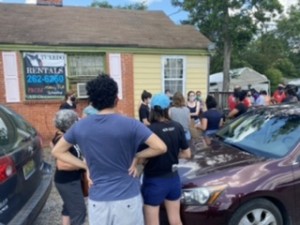 A group of protesters took to the streets of Montgomery Saturday afternoon to protest the death of George Floyd, the man killed by Minneapolis, Minnesota, police on Memorial Day. His death has sparked protests nationwide.

The group maintained social distancing while holding signs. They want improved race relations and police relations with the communities they serve.

“I’m a voice, I’m a black woman. We need to bring light to what’s going on in America and our cities and our states,” protester Andrewette McElroy said.

McElroy says she’s worried that the next “George Floyd” could be someone she knows well.

“I have family members friends, near and far and its concerning when you worry about their well-being,” McElroy.

Floyd, who was black, died when a white Minneapolis police officer pressed a knee into his neck and kept it there for more than eight minutes as Floyd was on the pavement.

The officer has been arrested and charged with third-degree murder and second-degree manslaughter.

A reenactment of the video was held at Saturday’s Montgomery protest.
It was a show of unity for African Americans who’ve recently lost their lives at the hands of police officers.

“We feel like that’s our brother: George Floyd. We feel like Breonna Taylor is our sister. And we just want to continue to make the voice heard and let people know this cannot go unnoticed no more,” organizer Ja’Mel Brown said.

After gathering in prayer, the group made a car procession along the streets of Montgomery before ending at the Montgomery Police Department.

“We came together. We’re trying to build a bridge between the police and the community,” organizer Karen Jones.

Similar protests have been held across the state, including Birmingham and Huntsville.
There is also another protest scheduled in Mobile set for tomorrow.

Stay with Alabama News Network for updates on this story throughout the day. 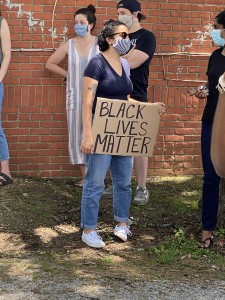