State Files Suit Against Birmingham for Removal of Confederate Monument 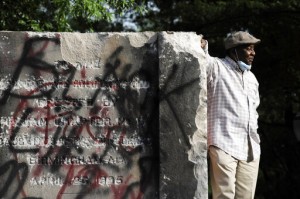 A man poses at the base of the Confederate monument at Linn Park in Birmingham after the majority of the monument was removed. (AP Photo/Jay Reeves)

Attorney General Steve Marshall has announced that he has filed a new lawsuit against the City of Birmingham for its removal  of the Confederate monument at Linn Park last night.

Marshall says that action violates of the Alabama Memorial Preservation Act. The lawsuit seeks additional penalties after the city lost a similar lawsuit filed by the State in 2017.

The Memorial Preservation Act was passed in 2017 by the Alabama Legislature to protect architecturally significant buildings, memorial buildings, memorial streets and monuments located on public property for 40 or more years. The monument in Birmingham has been in place for 115 years.

“The State of Alabama first filed suit against the City of Birmingham in 2017 after the City erected barriers around the monument in Linn Park. In November 2019, the Alabama Supreme Court sided with the State and determined that the City of Birmingham had violated the law and was subject to the Act’s penalties. However, the Court held that any violation of the Act was punishable only by a one-time fine of $25,000 per violation. Though legislation was filed in the 2020 session seeking to amend the penalties provision of the Act in response to the Court’s ruling, that legislation failed to become law,” Marshall said in a statement. 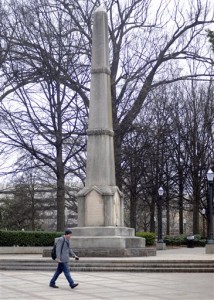 The monument became the focal point of a protest in Birmingham on Sunday night over the death of George Floyd by police in Minneapolis, Minnesota, on Memorial Day.  A group took down the plywood barrier surrounding the base of the monument and attempted to take it down or damage it.

Read the Lawsuit: State of Alabama v. City of Birmingham