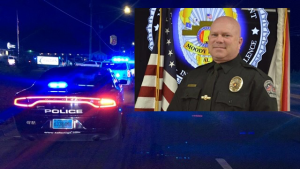 A police officer was shot and killed last night at a motel in Moody in St. Clair County.

The officer has been identified as Sgt. Stephen Williams.

Sergeant Williams was shot just before 9:30 last night during a possible standoff at the Super 8 Motel. He was taken to the hospital where he later died.

Officials say 2 suspects have been taken into custody. No word yet on a motive or what the initial call Sergeant Williams responded to.

He was a 23 year law enforcement veteran.