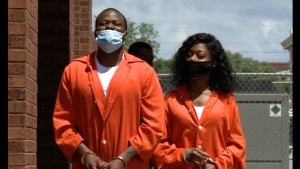 Authorties say Jarron Stallworth and Shakira Aaron of Selma were arrested early Thursday morning at the house where the standoff ended.

They say Stallworth is facing multiple charges including — attempted murder — criminal mischief — and shooting into an occupied dwelling. They say his bond was set at $5 million dollars.

Authorities say Aaron is charged with drug trafficking. And her bond has been set at $1.5 million dollars.

Both are being held in the Dallas County Jail.