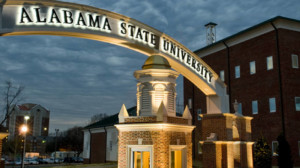 MONTGOMERY, Ala. (AP) — Alabama State University is establishing a scholarship to honor two black men who were killed by police.

The first recipients will be identified for the fall semester.

The scholarship honors not just Floyd and Gunn but any black person who died under similar circumstances, said President Quinton Ross.

“As we are searching for ways to bring about change in this nation and to advance the cause of black Americans, I can think of no better way than to ensure access to higher education for our young people,” Ross said.

The scholarship was begun with a $10,000 donation from a fund controlled by the president’s office.

Floyd died after a police officer pressed on his neck for nearly 9 minutes after he was accused of using a counterfeit $20 bill. One officer was charged with murder and three others who stood nearby were charged with aiding in the death.

Former Montgomery police officer Aaron Cody Smith was convicted of killing Gunn while the man was walking in his neighborhood late at night.