Auburn’s Tanner Burns was selected 36th overall in the Competitive Balance Round A by the Cleveland Indians. Burns was previously drafted by the New York Yankees in the 37th round of the 2017 MLB Draft. Last year he struck out 101 batters in 79 2/3 innings. Burns struck out 210 batters in his career, a 2.86 ERA with 14 wins in 37 appearances.

Burns was named an All-American along the way. 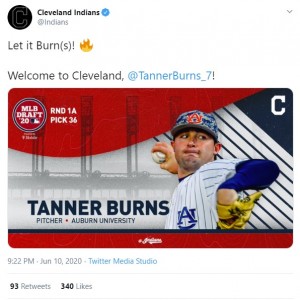 AUBURN, Ala. – Auburn junior right-hander Tanner Burns was selected by the Cleveland Indians with the 36th overall pick in the competitive balance round A of the first round of the 2020 Major League Baseball Draft Wednesday night.

“Hearing my name called in the first round is a dream come true, but I want to be a big leaguer, not just a professional baseball player, so there’s still work to do,” Burns said. “I can’t thank my family enough for their unwavering support. They’ve been with me every step of the way. I also want to thank Coach Thompson and the Auburn baseball program for investing in me not only as a baseball player, but also as a person. Lastly, I want to thank the Cleveland Indians organization for believing in me and giving me the opportunity to take that next step toward achieving my dream. I can’t wait to get to work.”

Burns’ selection marks the 46th consecutive season dating back to 1975 that Auburn has had at least one player selected in the MLB Draft – tied for the longest streak in the Southeastern Conference.

“Tanner came here with a great track record, a survival fastball and a competitive spirit and that made him a Freshman All-American,” Thompson said. “What I’m most proud of is the fact that he’s taken those things and has really developed. He’s an unbelievable teammate, all of his pitches are starting to develop, and I think he leaves Auburn with still a lot of room to grow and a high ceiling, which I think makes him even more valuable.

“He checks so many boxes as a person, teammate and competitor and has tremendous skill. You can kind of see that’s what is required of a first rounder is to check a lot of boxes, and Tanner Burns believes in himself and has a strong goal of being not only a major league but a long-time major leaguer. I think he has what it takes.”

In two-plus seasons on The Plains, the Decatur, Alabama, native posted a 14-9 record with a 2.86 ERA in 37 appearances and 36 starts. After going 3-1 with a 2.42 ERA and 32 strikeouts in 22.1 innings in 2020, Burns was named Second Team All-America by Collegiate Baseball, becoming just the third two-time All-American in program history – joining Olson and Mize. He is also the only player in program history to be named either Freshman All-America or All-America in three straight seasons.

Burns made an impact in an Auburn uniform since he stepped foot on campus prior to the 2018 season as he started every weekend of his freshman campaign and ranked second on the team with a 3.01 ERA en route to being named a Freshman All-American and SEC All-Freshman Team performer. He followed it up as a sophomore by becoming the second Auburn player since 2000 with 100 or more strikeouts en route to being named Third Team All-America by Perfect Game.