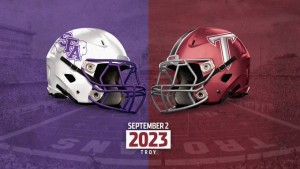 TROY, Ala. – Troy wrapped up its 2023 non-conference football schedule with the addition of Stephen F. Austin to open the season on Sept. 2, both schools announced Friday. The Trojans and Lumberjacks have a brief history having split the previous six meetings with all of the games coming when Troy was a member of the Football Championship Subdivision (FCS). Troy defeated SFA in the opening round of the 1993 FCS Playoffs before the schools spent five years at Southland Conference rivals from 1996-2000. The visit from SFA will be Troy’s first game against an active Southland Conference school since Abilene Christian came to The Vet in 2014. Troy’s 2023 schedule also features a home game against former Sun Belt rival Western Kentucky in addition to road trips to Army and Kansas State.