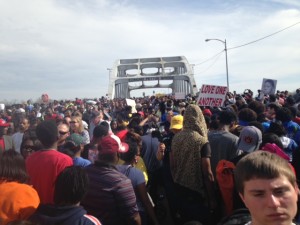 U.S. Rep. Terri Sewell (D-Alabama) says she supports renaming the historic Edmund Pettus Bridge in Selma. It was named for Pettus, a former U.S. Senator from Alabama who was also a Confederate Army officer and a Ku Klux Klan leader.

The bridge was the site of the pivotal Bloody Sunday civil rights struggle of 1965, which has international significance in the fight for racial equality.

In a statement, Sewell said:

“In the wake of George Floyd’s murder and the subsequent protests and outcry across the nation, there is no denying that this moment is different; our brothers and sisters – Black and white – are crying out for bold change.

“There is no denying that Selma’s Edmund Pettus Bridge-the site where foot soldiers shed their blood in the name of equality and justice for all Americans-is a powerful symbol of the civil rights movement. While I believe the historical significance of the bridge transcends the man for which it was named, I also acknowledge that in this moment everything must be on the table, and that includes renaming the bridge.

“My primary focus is on extending the rights of the living and not on the transgressions of the dead. The voices on the streets of the nation cry out to be heard and they demand real change. Removing Confederate memorials and renaming buildings is not the change they seek, but it is an important step in the process towards racial healing. We must be willing to do the easy things so that we can focus on making transformational change.

“To be clear: this moment requires removing any and all impediments to making the systemic changes our nation so desperately needs in policing, education, housing, economic policy and more.

“We must confront and reject Alabama’s racist history and come together to implement the bold changes needed to ensure our nation finally lives up to its promise of equality and justice for all.”

There have been calls to rename the bridge in honor of Georgia Congressman John Lewis, an Alabama native. Lewis was injured on Bloody Sunday.