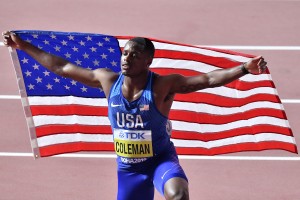 FILE – In this Sept. 28, 2019, file photo, Christian Coleman, of the United States, poses after winning the men’s 100 meter race during the World Athletics Championships in Doha, Qatar. Reigning world champion Coleman insists a simple phone call from drug testers while he was out Christmas shopping could’ve prevented the latest misunderstanding about his whereabouts, one he fears could lead to a suspension. (AP Photo/Martin Meissner, File)

The fastest man in the world has been sidelined for a string of missed doping tests.

American sprinter Christian Coleman has been banned from running after the Athletics Integrity Unit updated its list of athletes on provisional suspension to include the 100-meter world champion. The update came hours after Coleman revealed details of the case on Twitter. Coleman wrote that drug testers tried to find him on Dec. 9 while he was at a nearby mall Christmas shopping.

That was his third infraction in a 12-month period.