More arrests have been made in an arson investigation — following a fire that left a disabled Selma senior homeless.

Dallas Co. District Attorney Michael Jackson says three people have now been arrested in connection with the case — and more arrests are possible. 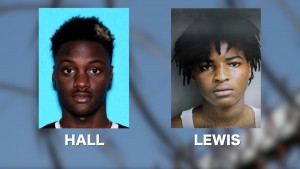 “These are two more of Selma’s Most Wanted.”

Jackson says both men are suspected of starting the fire that burned down the home of 77 year old Mary Johnson last month. Johnson lost everything in the fire — including her dog.

Jackson says the two are also suspects in a shooting on the 1700 block of Mabry Street back from back in April.

Hall — Lewis — and co-defendant Jarron Stallworth — are all being held in Dallas County Jail.

Lewis’ bond has been set at $2 million dollars.

And Stallworth’s bond has been set at $5 million dollars.