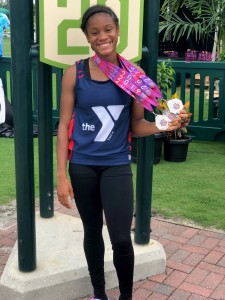 An Alpha Kappa Alpha ASCEND Scholar, Spicer has volunteered as a mentor with Save Kids of Incarcerated Parents (SKIP) and on behalf of a food drive in association with the True Divine Baptist Church Backpack Ministry. She has also donated her time to the Samaritan’s Purse Project as well as tutoring peers in math during the pandemic shelter-in-place. A RAM Ambassador, a member of the Key Club and HOSA Future Health Professional, she ushers at Sixth Avenue Baptist Church in Birmingham. “Chanice Spicer is essentially a Top-100 performer in three events, indoors and outdoors over the past year, capped off by her U.S. No. 24 in the outdoor 200 in 2019,” said Erik Boal, a DyeStat editor. “In two seasons of high school track, she’s earned nine state titles, set six school records and medaled four times at the AAU National Club Championship.”

Spicer has maintained a GPA of 4.21 in the classroom. She will begin her senior year of high school this fall.