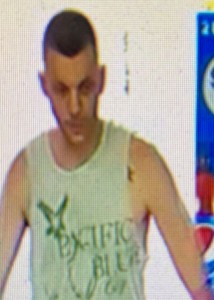 The Wetumpka Police Department has officially notified CrimeStoppers that a person has been identified in an ongoing Unlawful Breaking and Entering of a Vehicle investigation that occurred on May 8. The suspect is still at large.

According to Investigators, the pictured suspect was identified as 35-year-old Dewayne Allen Barnes. Barnes is described as a white male, 5’11” ft.in height, weighing approximately 220lbs.

Barnes was identified shortly after CrimeStoppers released a photo of an unidentified suspect wanted for unlawfully entering a vehicle and stealing several items including a firearm and credit cards in Wetumpka. Barnes reportedly used the credit card at several businesses in Wetumpka, Central, Kellyton, and Alexander City.

The vehicle he was last seen driving, a white older model Cadillac SUV with a sunroof, was impounded after law enforcement found it abandoned.

If you have any information regarding the whereabouts of Dewayne Allen Barnes, please immediately call the Police or CrimeStoppers using the 24-hour tip line at 215-STOP (7867) or download the P3-tips app. Make sure you receive a Tip ID and Password in order to dialog with Investigators in case there is a follow-up question. You may also use CrimeStoppers toll free number at 1-833-AL1-STOP.