Lots of Heat and Humidity This Week

Today will be very similar to Sunday, as we will see clouds and sun, hot and humid conditions, and isolated to scattered strong storms dotting the radar this afternoon and evening. Again, highs should be in the low to mid 90s, pushing heat index value over 100° at times this afternoon for most locations across South/Central Alabama.

REST OF THE WEEK: Tomorrow through Friday will feature higher rain chances returning. A ridge over the Plains, will allow some troughing across the Southeast, which will allow for numerous showers and storms on a daily basis. These will be possible at anytime, but the greatest coverage will come during the afternoon and evening hours. Of course, it will not be raining all the time, and we should see a partly sunny sky each day with hot and humid conditions. Highs mainly in the low to mid 90s are expected, and it will not take much for heat index values to be in the 100°-105° range during the afternoon hours. Rainfall again will be very unevenly distributed and is very hard to actually predict and rainfall totals could be one-half inch to 2 or 3 inches for some…but we should all see see some rain this week.

INDEPENDENCE DAY WEEKEND: The overall pattern just does not change much even for next weekend. Both Saturday and Sunday will feature a mix of sun and cloud with a generous coverage of showers and storms. Highs should continue to hover between 90°-95°. 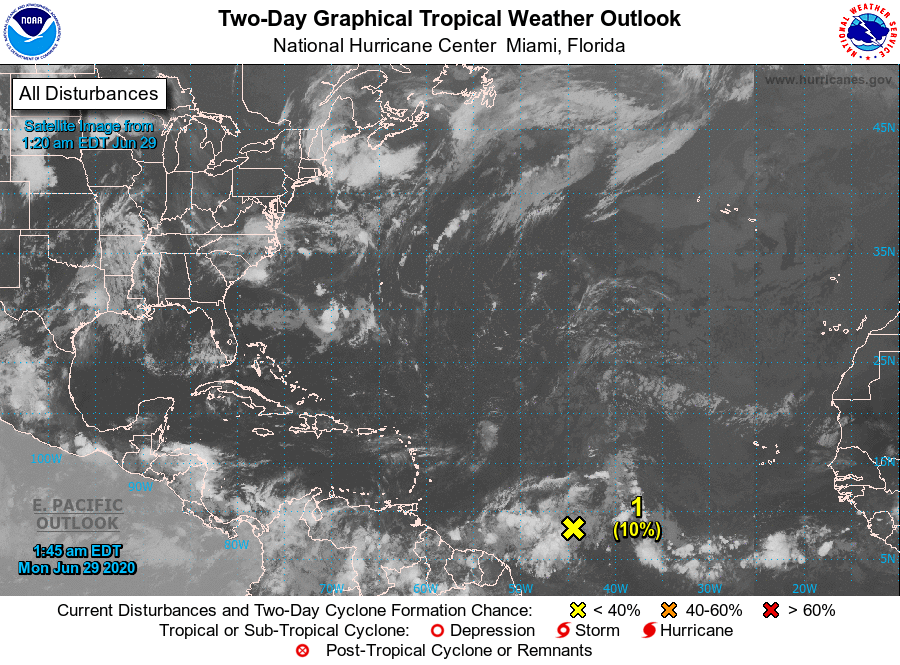 IN THE TROPICS: A couple of areas of interest. 1 Shower and thunderstorm activity associated with a tropical wave located over the central tropical Atlantic has increased during the past few hours. Some slight development of the wave is possible during the next day or so while it moves westward to west-northwestward at around 20 mph. Strong upper-level winds are forecast to inhibit further development by mid-week. Formation chance through 5 days…low…10 percent.

Stay cool, and stay healthy by washing your hands and wearing a mask.
Ryan

Staying Hot in the Days Ahead