Dangerous Heat Levels Today, and Likely Through the Weekend

HEAT ADVISORY IN EFFECT: Dangerous heat levels are expected today and the National Weather Service has issued a Heat Advisory in effect for much of West, Central, and South Alabama today. 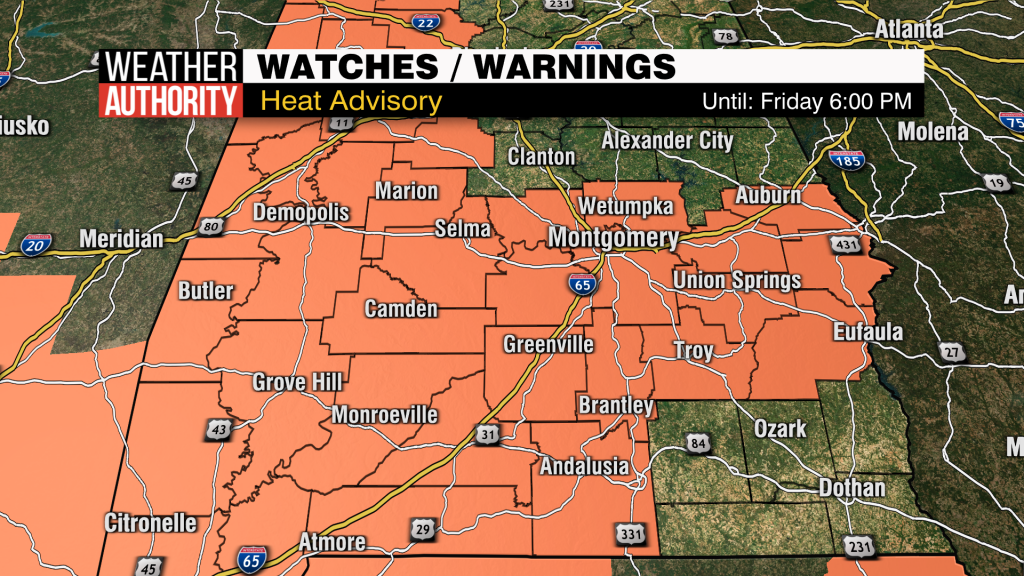 The combination of temps in the mid 90s, and dew points in the low to mid 70s will allow for heat index values to approach the 105°+ danger zone this afternoon. 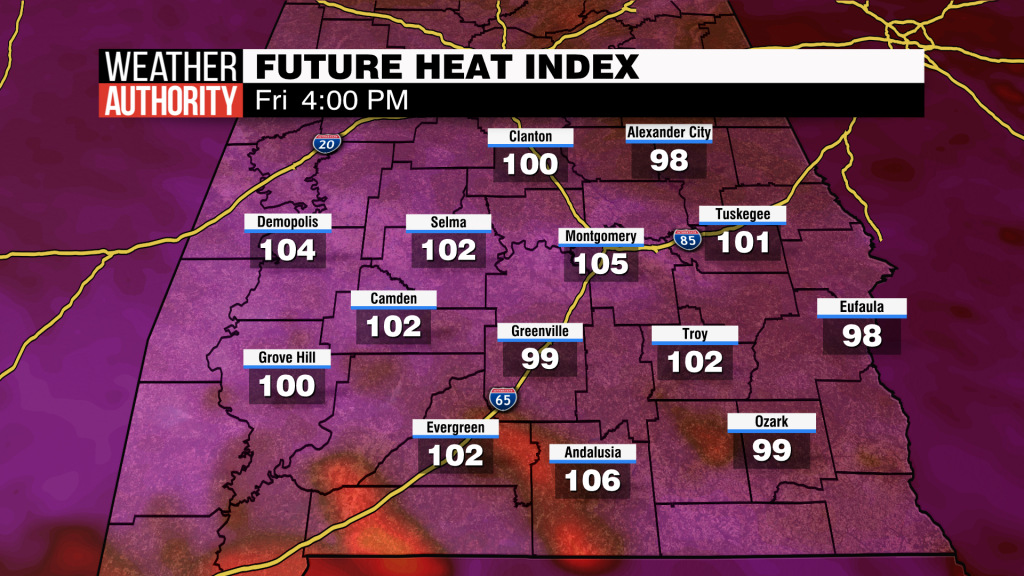 The overall weather pattern for Alabama is not changing much as it remains very humid as a tropical air mass remains in place. Expect a partly sunny sky today and we will are watching the radar especially as we roll into the afternoon hours as showers and storms should start developing across the Alabama landscape and these will be our only heat-relief, but most locations will stay dry today.

HOT AND HUMID WEEKEND: Both days expect a mix of sun and clouds, with hot and humid conditions, as highs will range from the low to upper 90s across the state. With such high humidity levels, heat index values will be well over 100° at times this weekend, and we are likely to see areas again over the 105° Heat Advisory criteria both days. Isolated to scattered showers and storms will dot the radar both afternoons and evenings. We will also have to watch any organized thunderstorm areas that form over Missouri or Arkansas; those could roll into Alabama thanks to a northwest flow aloft. No way of knowing in advance exactly when, or if they form…just something for us to watch in the weather department for the weekend, but we note the SPC does have much of Alabama in a “marginal risk” (level 1/5) for severe storms Sunday as some stronger storms could produce strong, gusty winds…stay tuned!!! 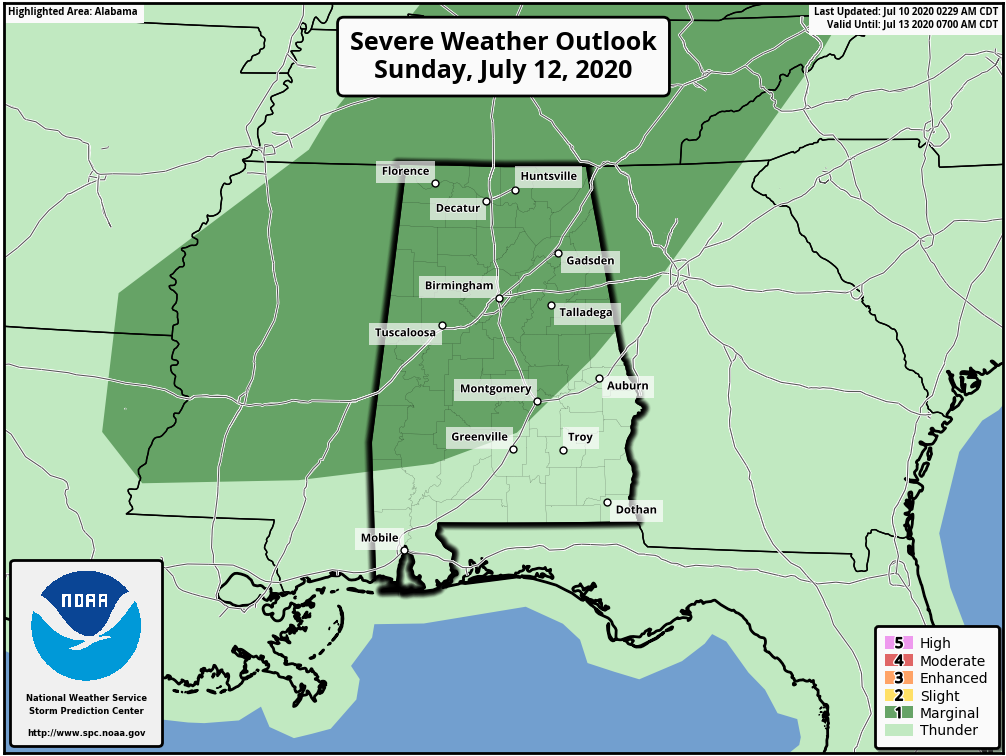 NEXT WEEK: Very hot and humid weather continues through the week as the upper-level ridge strengthens. Expect partly cloudy days, with highs likely in the mid-90s, and yes it will feel hotter as heat index values will easily be over 100°. The only heat-relief will come from random, widely-spaced, afternoon and evening showers and thunderstorms. Classic mid-summer weather for Alabama.

TROPICS: As expected we have Tropical Storm Fay off the East Coast today. At 500 AM EDT, the center of Tropical Storm Fay was located near latitude 37.4 North, longitude 74.8 West. Fay is moving toward the north near 10 mph. A northward to north-northeastward motion at a faster forward speed is expected over the next couple of days. On the forecast track, the center of Fay is forecast to move near the mid-Atlantic coast today and move inland over the mid-Atlantic or the northeast United States late tonight or on Saturday. 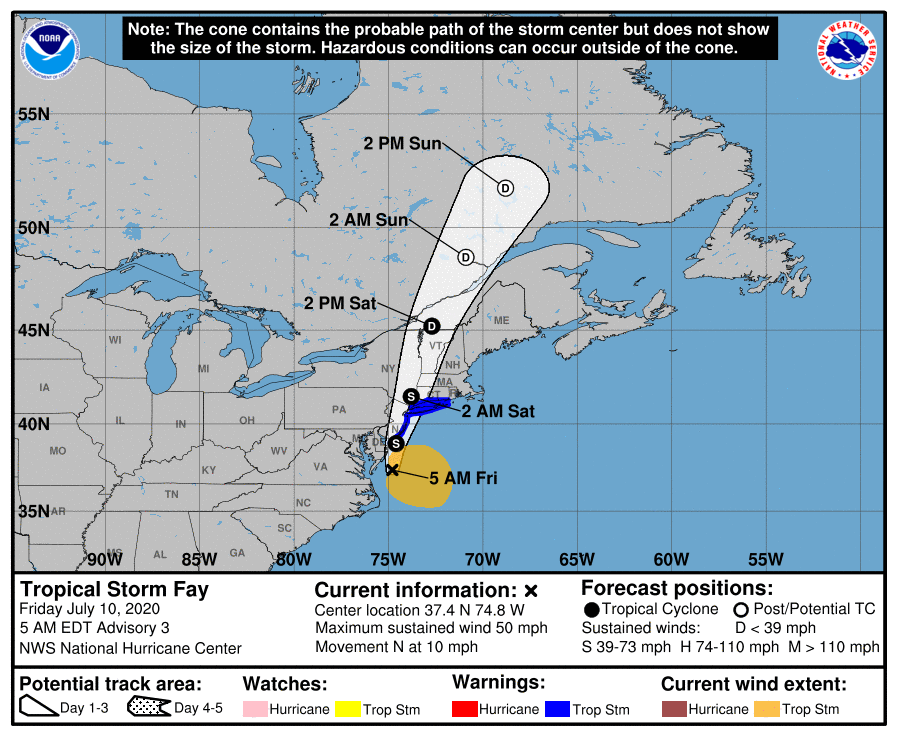 Reports from an Air Force Hurricane Hunter aircraft indicate that the maximum sustained winds have increased to near 50 mph with higher gusts. Little change in strength is forecast today and tonight while the center remains over water. Weakening should begin after the center moves inland. The Air Force plane reported a minimum central pressure of 1002 mb (29.59 inches).

The rest of the Atlantic is quiet with no other tropical cyclone development expected through the weekend.

Stay cool, PLEASE wear a mask, and follow all other CDC guidelines!!!
Ryan