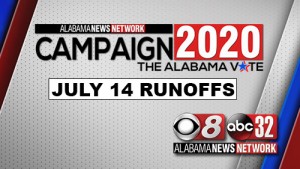 Alabama News Network has complete results of the July 14 runoffs.

Another race to watch in our area is the Republican runoff for the Second District Congressional seat. Jeff Coleman and Barry Moore are battling each other, with the winner taking on Democratic candidate Phyllis Harvey-Hall.  This race is to replace U.S. Rep. Martha Roby, who chose not to seek re-election.

There are also several local runoffs in our area.