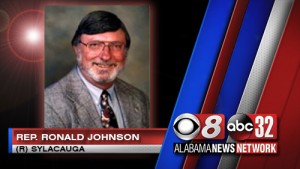 State Rep. Ronald Johnson, (R-Sylacauga), the Dean of the Alabama House of Representatives, died this afternoon of complications from liver cancer.  He was 76.

Johnson held the District 33 seat that includes portions of Clay, Coosa and Talladega counties for more than 40 years, making him the longest continuously serving member of the House.

“Ron Johnson was one of the most respected members of the Alabama House and he served with distinction since 1978.  In my years as a member and speaker, I valued Ron not only for his institutional knowledge that helped guide me but also for his friendship,” said Speaker of the House Mac McCutcheon in a statement.  “He made sure the voices of the people of his district were always heard.  My wife Debbie and I send our thoughts and prayers to his family.”

Originally elected as a Democrat, Johnson switched to the Republican Party in 1998.

He served on the agenda setting House Rules Committee. He was vice chair of both the House Economic Development and Tourism Committee, and the House Health Committee.

Johnson was a pharmacist with degrees in chemistry and biology from Florida State University and a pharmacy degree from Auburn University.

He is survived by his wife Susan and his daughter Stephanie Lee.

— Information from the Alabama House of Representatives