People in Selma are remembering the life and legacy of civil rights icon and Alabama native — John Lewis.

Flags are flying at half staff around the city — in honor of Congressman John Lewis. Lewis died Friday after a seven month battle with pancreatic cancer. 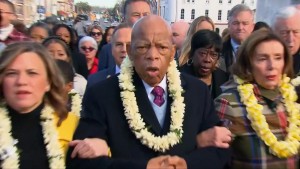 “The world has lost a great, not just an icon but, a great symbol of justice and equality and perseverance with John Lewis,” said Collins Pettaway.

Lewis was one of the key figures in the Voting Rights Movement in Selma — and one of the leaders of the march on Bloody Sunday.

An effort to rename the Edmund Pettus Bridge in his honor — has been gaining momentum around the country.

“To me it seems like it’s a national landmark so it seems appropriate,” said Cammy Bergren. “John Lewis was an incredible figure and deserving of a memorial.”

“Congressman John Lewis is well endowed enough to have that bridge named after him and that would be fitting. But however, I think the final decision needs to rest with us local folk,” said Pettaway.

Lewis was a native of Troy. He was 80 years old.