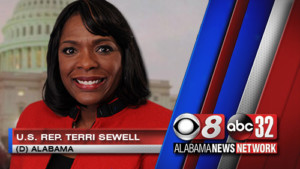 Mourning the death of civil rights hero John Lewis, Democrats in Congress are urging the Senate to take up a bill of enduring importance to Lewis throughout his life: protecting and expanding the right to vote.

“No right is more precious to our citizenship than the right of all Americans to be able to vote,” said Rep. Terri Sewell, (D-Alabama), the House bill’s chief sponsor. “When Americans are not able to cast their ballots, their votes are silenced.″

Speaker Nancy Pelosi, Majority Whip Jim Clyburn and other Democrats say the Senate should take up a House-passed bill to restore key sections of the landmark 1965 Voting Rights Act and rename it for Lewis, a longtime congressman who died July 17 of pancreatic cancer.

Senate Majority Leader Mitch McConnell called Lewis a “great man” who helped bend the nation’s history toward justice, but Republicans appear unlikely to bring up the voting rights bill for a Senate vote.

The impasse highlights how the bipartisan consensus around civil rights-era voting protections — and particularly the use of federal power to enforce them — has evaporated since a 2013 Supreme Court decision struck down portions of the 1965 law.

Pelosi, D-Calif., said Monday that “the appropriate way to honor John Lewis is for the Senate to take up the Voting Rights Act and name it for John Lewis.″

Clyburn, a South Carolina Democrat and close Lewis friend, said McConnell and President Donald Trump “can demonstrate their real respect for the life and legacy of John Lewis by passing that bill in the Senate, and the president signing it.″

“Let’s have our election this year in honor of John Robert Lewis,″ Clyburn said Sunday on NBC’s ”Meet the Press.″

Lewis, a Democrat who served 17 terms in the House, was for decades a force behind civil rights and voting rights laws. Most recently, he spoke out against police violence after the May 25 police killing of George Floyd, a Black man in Minneapolis. Floyd’s death and other police killings have sparked a national reckoning over racism and protests in cities from coast to coast.

In an interview Monday on MSNBC’s “Morning Joe,″ Pelosi said Congress traditionally has reauthorized the Voting Rights Act by overwhelming, bipartisan votes — “and John Lewis was very much a part of that.″

“We all walked down the steps of the Capitol together″ after one such vote, Pelosi recalled, adding that it was “really hard to comprehend” why Republicans resist taking up the Voting Rights Act. “Maybe now they see a path,″ she said. “I certainly hope so.″

But it has become a contentious issue, particularly in the wake of the Supreme Court decision declaring a key section of the Voting Rights Act unconstitutional. The ruling in Shelby County v. Holder tossed out a “pre-clearance” provision that required officials in more than a dozen, mostly Southern states to receive federal approval before making changes to the voting process.

The House approved a bill in December essentially reversing the 2013 decision and imposing new obligations on states and local jurisdictions. Lewis, who was bloodied and bludgeoned in a civil rights march on Bloody Sunday in Selma, months before the original voting rights law was passed, presided in the House chamber as lawmakers voted to extend it. His mere presence signaled the importance Democratic leaders placed on the measure.

Lewis and other supporters said the bill would help prevent voter suppression in the South and other areas by developing a process to require states and localities with a recent history of voting rights violations to pre-clear election changes, like the closure of polling places, with the Justice Department.

Strict voter registration requirements, polling place confusion and other obstacles faced by Georgia voters in 2018 show why federal oversight of elections is still needed in places with a history of discrimination, Democrats said. Problems also were reported in Florida, where elections officials came under withering criticism for their handling of a legally required recount in close races for governor and U.S. Senate.

Republicans called the bill unnecessary and said it would take away important powers from the states. Trump promised a veto if the bill reached his desk, calling it federal overreach.

McConnell’s office declined to comment Monday. But the Kentucky Republican told The Wall Street Journal last week that claims by Democrats and civil rights groups that Black voters are disadvantaged by state-based measures such as ID requirements or shortened voting hours are without merit.

“There’s very little tangible evidence of this whole voter-suppression nonsense that the Democrats are promoting,” McConnell said. “My prediction is African-American voters will turn out in as large a percentage as whites, if not more so, all across the country” in November.

Former Attorney General Eric Holder, who is named in the 2013 case, said restoring voting rights lost in the Shelby decision would be an appropriate honor for Lewis, whose commitment to the cause “animated him every day of his service as a representative for the oppressed in this nation and as a guiding light for his country.″

Since Shelby, state legislatures and local officials have closed nearly 1,700 polling places across the country, Holder wrote in an op-ed for The Washington Post. “Voters have been unnecessarily and inexcusably stricken from the rolls — with purge rates 40 percent higher in states that were previously covered” by the Voting Rights Act, Holder wrote.

“Over the past decade, 25 states have instituted draconian anti-voting laws that clearly and intentionally have a disproportionate impact on communities of color,″ he added. Many of the laws were passed in the name of combating voter fraud, but Holder and other Democrats said the real issue was voter suppression.