Some in Selma Oppose Renaming Bridge for Rep. John Lewis 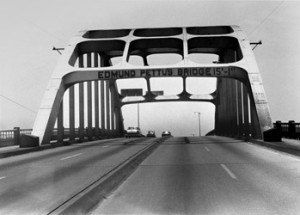 Growing calls nationally to honor the memory of Rep. John Lewis by putting his name on the Edmund Pettus Bridge in Selma where he and other voting rights demonstrators were beaten 55 years ago are being met with some resistance in the city.

Some say renaming the bridge for the Georgia congressman would dishonor local activists who spent years advocating for civil rights before Lewis arrived in town in the 1960s. Others fear tourism would be hurt if the Pettus name — which is known worldwide yet belonged to a white supremacist — were gone.

Although about 480,000 people have signed one online petition to rename the bridge for Lewis and leaders including Rep. James Clyburn of South Carolina and “Selma” movie director Ava DuVernay are advocating for the idea, state officials say any decision would have to be approved by Alabama’s Legislature.

State lawmakers are unlikely to act without the backing of area leaders, and right now there’s no sign of widespread support.

Rep. Prince Chestnut (D-Selma) called Lewis “a great and noble man” but added that renaming the bridge for Lewis “is not appropriate.”

“There were many Selmians and Alabamians who were either on the bridge in March 1965, near the vicinity or precipitated the situation that changed this country for the better. John was not the only one,” Chestnut said in a statement to The Associated Press.

Selma Mayor Darrio Melton called it “insulting” that the wishes of Selma residents haven’t been taken more into account during discussions about the bridge name dating back at least five years. And focusing on a name rather than ways to solve racial and economic inequality disrespects Lewis’ legacy, he said.

“Everybody is talking about changing the name of the bridge, but they’re not talking about investing in Selma,” Melton said. “To me it’s more about the system than it is the symbol.”

Michael Starr Hopkins, a Washington-based consultant who launched the fast-growing online petition, said he’s beginning to contact Selma-area leaders. Starr said he didn’t know how much money has been raised by a nonprofit he founded to support the renaming idea and likely wouldn’t release a fundraising total if he did.

“We are in a moment. Are we going to fight each other or the system of oppression that has held Selma back?” Hopkins said.

State Sen. Malika Sanders-Fortier (D-Selma) said she’s heard from no one in Selma who supports renaming the bridge for Lewis only. A group that was recently formed to make sure the town has a voice in the debate, Selma Matters, has spoken with Hopkins, she said.

“My hope is that we can come to some sort of compromise,” said Sanders-Fortier, who succeeded her father, former state Sen. Hank Sanders, in office.

Sanders, who has publicly advocated for renaming the span “The Bridge to Freedom,” sponsored a resolution that would have allowed the bridge to be renamed in 2015 when he was still in the Senate, but the measure died in the House.

Gov. Kay Ivey would work with lawmakers if a bill to rename the bridge reached her desk, and aide said, but that seems unlikely to happen. The Democratic leader in Alabama’s Republican-controlled House, Rep. Anthony Daniels (D-Huntsville), said he’d follow Chestnut’s lead on the issue since the bridge is in Chestnut’s district.

Dedicated in 1940 during the period of legalized segregation, the twin-arched bridge over the Alabama River was named for Pettus, who fought for the Confederacy and was a white supremacist and reputed Ku Klux Klan leader. At the time, Pettus was praised for his work after the Civil War to fight the emergence of Black political power.

A quarter-century after the bridge opened, Lewis led some 600 voting rights marchers across the span until they were attacked by Alabama state troopers, who beat Lewis and others in a violent spectacle that came to be called “Bloody Sunday.” Even more people subsequently made the Selma-to-Montgomery voting rights march.

Today, the hometown “foot soldiers” who marched with Lewis see the bridge as a symbol of freedom, and many relish the fact that the name of a one-time Confederate also is associated with civil rights for Blacks. If anyone is honored anew, they say, it should be local activists.

“I just feel strongly that it should not be named ‘John Lewis Bridge,’” Lynda Lowery, who was among the marchers, told The Associated Press in an interview last month.

Chestnut said he hasn’t spoken with a single local survivor of the attack who supports renaming the bridge for Lewis. It might be time to change the name of the bridge, Chestnut said, but he’d favor calling it something like “Bloody Sunday Bridge” or “Historic Selma Bridge” rather than naming it for Lewis.

District Attorney Michael Jackson said the wishes of Selma residents matter most but the national dialogue over renaming the bridge for Lewis should be taken into account.

“The name of that bridge is bigger than Selma,” he said.