Despite scattered rain showers, hundreds of people in Montgomery gathered Sunday to say goodbye to Rep. John Lewis and to publicly say thank you to his lifetime of service in the fight for civil rights.

A hearse carried his casket up Dexter Avenue where he laid in state inside the Alabama Capitol. Crowds lined up to pay their respects to him, including Gov. Kay Ivey. 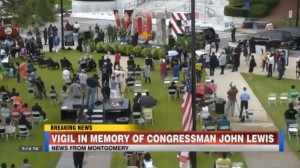 Tonight, a memorial vigil was held in Bicentennial Park across from the Capitol. After welcoming remarks from Montgomery Mayor Steven Reed, civil rights leaders and other dignitaries expressed their own personal tributes to him.

“He recovered without a trace of bitterness or hostility and without losing hope in our democracy,” she said.  Lewis had received a cracked skull and a concussion when law enforcement officers physically stopped the marchers once they crossed the bridge.

King remembered that after her father was assassinated in 1968, Lewis was one of the few who remained committed to non-violence, living her father’s words that hate was too great a burden to bear.

Dr. Joe L. Reed, the father of the mayor, said of Lewis, “John was a servant who wanted to do good at all times and wanted everyone else to do good.”

Civil rights attorney Fred Gray, who represented many leaders of the movement over the decades, recalled how much has changed in the fight for civil rights.

“Who would have thought that there would be six days of activities for John Lewis in two states and the District of Columbia?” he said.

The body of Lewis will be flown to Washington, DC as events to honor his life continue this week, leading up to the funeral at Ebenezer Baptist Church in Atlanta on Thursday.