On the day the world says a final goodbye to Congressman John Lewis, the Chief Deputy of the Montgomery County Sheriff’s Office is remembering the special friendship he had with the late civil rights icon. 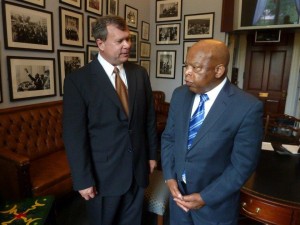 In 2013, when Kevin Murphy was Montgomery’s Police Chief he formally apologized to Congressman John Lewis for MPD’s actions during the attack on the Freedom Riders in 1961.  The police department failed to protect Lewis and the rest of the Freedom Riders from a violent mob.  Murphy took his apology a step further, by giving Lewis his police badge.  That moment led to years of friendship, giving him a look at the man behind the icon.

“He was a very humble man, he didn’t act any differently when we were in private, he was a gentleman, told a lot of great stories,” Murphy shared.

Congressman Lewis had Murphy visit Washington, D.C. as his guest, in the years since the apology.