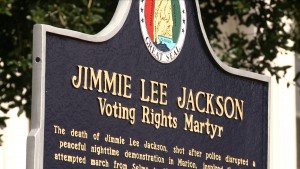 The life and legacy of John Lewis is — forever tied to Bloody Sunday — and Selma to Montgomery marches. Historic events — sparked by events — that started in Perry County.

The very idea for the Selma to Montgomery march — was born in the city of Marion — after the death of Jimmie Lee Jackson.

Jackson was shot by a state trooper — when a group of marchers were attacked by law enforcement — following a mass meeting.

People were so outraged by Jackson’s death — they wanted to lay his body on the steps of the Capitol.

The first attempt at the march — ended in violence.

Albert Turner, Sr. of Perry County — was one of the leaders of the march that day. He was on the frontline with Hosea Williams — Bob Mants of Lowndes County — and John Lewis.

Perry County Commissioner Albert Turner Junior grew up listening to his father — talk about what happened that day.

“When they got to the foot of the bridge they saw the sea of blue and they kneeled to pray and when they got up from there it was just chaos,” he said.

The marchers were attacked by Alabama State Troopers.