The SEC switched to a 10-game conference-only schedule and Friday the two additional SEC opponents were announced. Auburn will travel to South Carolina and play host to Tennessee. Alabama will go to Missouri and face Kentucky at home. Dates and time are still to be determined. 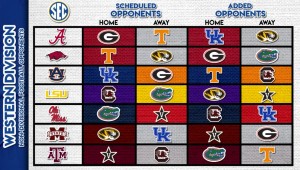 TUSCALOOSA, Ala. – The Southeastern Conference announced two additional SEC East opponents for Alabama’s 2020 schedule Friday afternoon on the SEC Network. The Crimson Tide gained a road game at Missouri and a home contest against Kentucky.

The Wildcats and Tigers are added to a schedule that already includes homes games against Auburn, Georgia, Mississippi State and Texas A&M along with road contests at Arkansas, LSU, Ole Miss and Tennessee.

Alabama and Kentucky will meet for the 41st time in the history of the two programs. The Crimson Tide owns a 37-2-1 (.938) all-time advantage in the series, including a current six-game winning streak that dates back to 2003. The two teams last met in Tuscaloosa on Oct. 1, 2016, for Alabama’s Homecoming matchup with the Tide claiming a 34-6 win over the Wildcats.

The Crimson Tide and Missouri will meet for the seventh time in series history when the two teams square off in 2020. The Crimson holds a 4-2 (.667) lead in the previous six pairings and has won the last four matchups after dropping in the first two games of the series. Alabama and Missouri last met on Oct. 13, 2018 in Tuscaloosa for Homecoming with the Crimson Tide winning, 39-10.