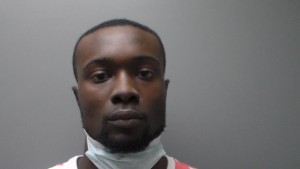 On Monday August 17, the Troy Police Department arrested Kendarius D’Andre Carter, 21, of Troy on one count of Assault 2nd. The arrest is in connection to a shooting that occurred at approximately 9:25am on August 12,  in the area of Magnolia Court and the 200 block of Aster Avenue.

On Wednesday August 12, around 9:25am, Troy Police Department officers responded to the 200 Block of Aster Avenue in reference to a shooting. Officers arrived on scene and located one gunshot victim that had received non-life threatening injuries. The victim was transported to Troy Regional Medical Center and would later be moved to Montgomery for treatment.

Investigators responded and began processing the scene. During the course of the investigation, Investigators identified Carter as the suspect and was able to obtain a warrant for Carters arrest on the Charge of Assault 2nd Degree with a $25,000 bond.

On Monday August 17 at approximately 1:40pm, Troy Police Department Investigators arrested Carter in the 400 Block of Warbler Drive in Troy. Carter was transported to the Troy City Jail for processing and later to the Pike County Jail.

This case is still under investigation by the Troy Police Department.