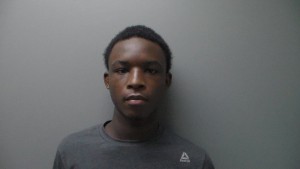 Wadrickus James Howard, 17-years-old of Troy has been arrested in connection with the shooting death of Jacoby Deshon Cogburn. Howard has been charged with Capital Murder and will be held in the Pike County Jail with no bond. He is the second suspect charged in the murder, along with 17-year-old Jamarco Harris.

On Monday July 13th, at about 9:13 PM, Troy Police responded to the 300 block of the Elba Highway to reports of several shots fired in the area. When officers arrived, they found Cogburn dead at the rear of Tanglewood Apartments.

During the Investigation, witnesses identified the suspect’s vehicle as being a white car. This vehicle has been located by Troy Police.

The investigation into the death of Jacoby Cogburn is still on going.

If you have any information regarding the death of Jacoby Deshon Cogburn, call the Troy Police Department at 334-566-0500 or CrimeStoppers  at 215-STOP.