“Get better tires for far less!” Mr. Trump tweeted, saying that he was taking a page from “Radical Left Democrats.” He added, “Two can play the same game, and we have to start playing it now!”

Mr. Trump’s tweet comes after a report in Topeka, Kansas, that some employees at a Goodyear plant in the city were told that that the company had “zero tolerance” for wearing clothing with political messaging. Those messages reportedly include MAGA attire, as well as all other clothing with political themes, as well as phrases like “All Lives Matter” and “Blue Lives Matter.”

According to a training slide shown by the station, the company said some slogans are acceptable, including “Black Lives Matter” and LGBT pride-related messages.

Goodyear on Wednesday issued a statement stating that the company “has always wholeheartedly supported both equality and law enforcement and will continue to do so.” The statement noted that the image in question did not come from Goodyear’s corporate headquarters and “was not part of a diversity training class,” while reiterating its ban on political content in the workplace. 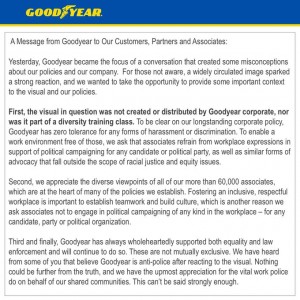