Selma Voters Head to the Polls for the Municipal Election

Dreary weather conditions couldn’t stop Selma voters from heading out to the polls Tuesday. They were determined to have a say — in choosing who will lead the city over the next four years.

It’s rained off and on all day in the city — but poll officials say voter turnout for the election has been fairly steady. 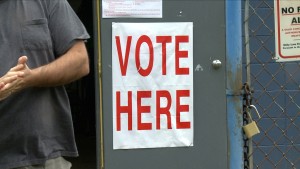 “We’ve had a steady flow. We’ve had one maybe five or ten minute section with nobody here. But we frequently have 7 or 8 people in line. By 11 o’clock we had over 200 people here, which is not bad for a city election and a polling place kind of off the road like this,” said Poll Inspector Don King.

Selma voters are choosing a new mayor — along with the people who will serve on the city council — as well as the school board.

There are a dozen candidates on the ballot in the race for the mayor’s office. And there are no incumbents running — in four of the city’s eight city council ward races.

“People are anxious to vote and they’re ready to do their civic duty,” King said.