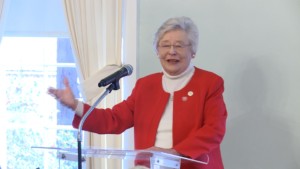 The Sumter County Commission will use funds to improve infrastructure necessary for Enviva, the world’s largest producer of wood pellets, which is investing more than $140 million in building a production facility at the Port of Epes Industrial Park along the Tombigbee River.

“This project will produce much needed jobs in Sumter County and throughout much of Alabama’s Black Belt region,” Gov. Ivey said. “In addition to quality jobs at the plant, the area’s forestry industry will also feel a positive impact because of the plant’s reliance on wood resources.”

Earlier this year, Gov. Ivey awarded a $600,000 grant through the state’s Inland Port Infrastructure Program to make improvements at the Port of Epes to attract industry and improve commerce on the Tombigbee and other rivers in Alabama.

The Community Development Block Grant funds will be used to provide water and sewer services to the Enviva site.

Enviva’s wood pellet mill in Epes is projected to annually produce about 600,000 metric tons of wood pellets that will be exported to Europe and Asia where pellets are a major source of energy production.

The Alabama Department of Economic and Community Affairs is administering the grant from funds made available by the U.S. Department of Housing and Urban Development.

“No one more than Gov. Ivey realizes how vital jobs are in Alabama and particularly the state’s Black Belt region,” ADECA Director Kenneth Boswell said. “ADECA is committed to helping Gov. Ivey achieve her desire to attract new or expanding industry and ensure that Alabamians, no matter where they live, have the opportunity to obtain good paying jobs.”

Gov. Ivey notified Sumter County Commission Chairman Marcus Campbell that the grant had been approved. The county plans to contribute $500,000 in other funds for the project.