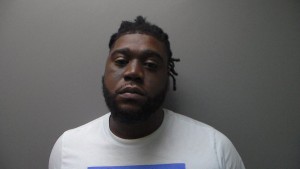 Willie Jamel Bray, 26, of Troy, has been arrested by the Troy Police Department for Domestic Violence 1st degree.

Officers responded to a report of a man down on Peacock Street at 7:25 am Sunday morning. When officers arrived, they found 51-year-old Willie Edward Bray suffering from a gunshot wound to the abdomen. Paramedics from the Troy Fire Department and Haynes Ambulance treated the victim on scene.

Further investigation revealed that the shooting took place in the 200 block of Jones Street. Willie Edward Bray was involved in an argument with his son, Willie Jamel Bray about the use of his truck. The argument began inside the home and became physical. The physical confrontation continued outside.

Willie Jamel Bray took out a handgun and shot his father, Willie Edward Bray in the stomach. A search warrant for the residence was obtained, and the handgun used was recovered inside the home.

Willie Jamel Bray was processed through the Troy City Jail and the transported to the Pike County Jail. Bond was set at $100,000.00.

This case remains under investigation by the Troy Police Department with assistance from the Pike County District Attorney’s Office.