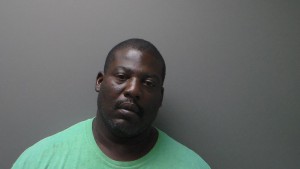 On Sunday, August 30, around 1:48 pm, Troy police received a call from subjects that they were being chased Barr and said he was shooting at their vehicle. Responding officers observed Barr chasing the victims as they pass by the Troy Police Department. Officers attempted to stop the vehicles but neither vehicle stopped. They drove around the police department and pulled in the parking lot. When in the parking lot, Barr exited his vehicle with a gun and shot the back seat passenger of the other vehicle. The responding officer confronted Barr; Bar threw his gun down and was taken into custody without incident.

An investigation revealed that Barr and the backseat passenger he shot were involved in a relationship.

The 44-year-old woman was taken to Troy Regional Medical center with a non-life threatening gunshot wound to the hand. The other two adult females occupants of the vehicle were uninjured.