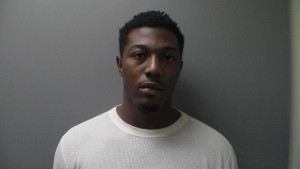 The Troy Police Department has arrested Roderick Talferio Roberson Jr., 24, of Troy on one count of Capital Murder in connection with the shooting that occurred at the Pike County Cattleman’s Complex in the early morning hours of August 15th.

On August 15, around 1:59 am officers were dispatched to assist with dispersing a large crowd at the Pike County Cattleman’s Complex in the 12,000 block of U.S. 231 South. As officers were enroute, multiple shots were fired in the parking lot of the complex. Five people were shot. Devonta Givens and Jhakyndall Johnson both 25 years old, died from their injuries in the shooting. The other three injured victims have all been released from the hospital.

Roberson was taken into custody in Rockdale County, Ga by members of the United States Marshall Service and the Rockdale County Sheriff’s Department. He was held in Georgia until extradition process could be completed. He was brought back to Troy on September 3rd. Roberson was processed at the Troy City Jail. He will be held at the Pike County Jail on no bond.