Cycling Club Rides to Help the Homeless in Selma

The Selma members of a national cycling club are hosting a cycling event Saturday — to benefit homeless people in the Selma community.

Sixty-four year old David Johnson Jr. sleeps out in front of the old Grist YMCA on the corner of Furniss Avenue and Broad Street. But if you ask — he’ll probably tell you he’s not homeless — even though he sleeps on the street.

“Man, ain’t no homeless person live here. I got home. I can buy this. Cash money. If I want to.”

Cycling 4 Love is an event designed to provide a little help to people like Johnson.

Cyclists will ride from Montgomery to Selma — in an effort to raise awareness about the plight of people who are often overlooked and forgotten.

They also plan to pass out resource bags to some of the city’s homeless. 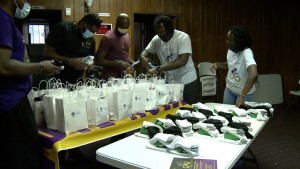 “You have you’re hand sanitizers, you have socks, you have soap, you got a toothbrush, you towels, you gloves. I mean we tried to load them with all of the essentials that they may need,” said Johnathan Harris.

Harris created the event with the help of some of his Omega Psi Phi frat brothers — as a way to give back to the community every year.

“It’s something that needs to be done,” he said.