Prattville Police Charge Man with Murder in Death of Baby 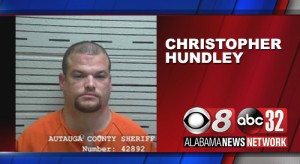 Prattville police say they’ve charged Christopher Hundley, 32, of Prattville with murder. They say he was already in the Autauga County Metro Jail when the murder warrant was executed.

Police say the charge is related to the investigation into of a domestic assault of Hundley’s wife, who was pregnant at the time.

Police say injuries sustained by Hundley’s wife during the assault resulted in her going into labor and ultimately led to the death of the infant.