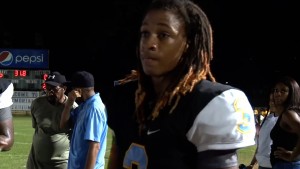 Sixteen year old Keondre Hope was magnificent on the football field — outstanding in the classroom — and an even better person.

“I have two daughters and I would highly recommend Keon Hope to marry one of my daughters cause he’s a great stand up guy” he said.

Hope was the Saints’ starting quarterback last season — but had transferred to Park Crossing High School in Montgomery this year.

He was killed in an ATV accident last week in Montgomery.

“He’s going to be truly missed and we love Keon Hope,” said Pritchett.

A parade from Memorial Stadium to Selma High — and a candle light vigil was held Thursday evening in Hope’s honor.

Keondre’s parents were also given his #3 Selma High game jersey in a frame.

And there’s even talk about retiring his number.