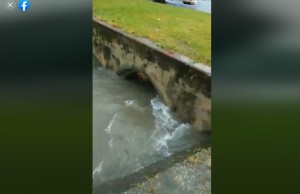 Emergency officials in Andalusia say three people had to be rescued after being pulled under the water in a drainage ditch this afternoon.
Fire Chief Russell McGlamory said his department responded to a call that a teen was drowning on Walker Avenue. The teen had been paddleboarding in a ditch that runs from Walker Avenue, underground and through Robinson Park.
The teen was pulled into the underground drainage ditch. His brother attempted to rescue him and was pulled under and his father soon followed.
All escaped injury. Both the fire department and Advanced EMS responded to the scene.
Video: City of Andalusia

Three people have a dramatic story to tell this afternoon after being pulled under in a drainage ditch. Fire Chief…

Posted by City of Andalusia on Wednesday, September 16, 2020