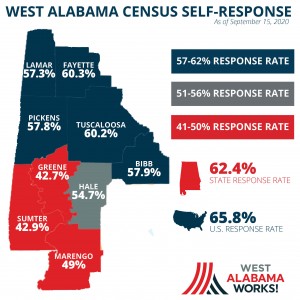 The workforce development council called West Alabama Works reports that several counties in that part of the state are still lagging behind in responding to the 2020 Census. The deadline for people to fill out the census forms is September 30.

The group says Marengo, Greene and and Sumter counties have rates below 50 percent.

West Alabama Works is encouraging employers to give employees time to take the Census at work.

“We are working to break down any barriers for those completing the Census. We feel that encouraging employers to give their employees time to take the Census is a perfect opportunity. Employees may not have time to respond at home, or they may not have reliable internet at home,” said Chamber of Commerce of West Alabama COO and West Alabama Works Executive Director Donny Jones.

State officials say $13 billion in federal funding and possibly a seat in the U.S. House of Representatives are at stake, depending on how accurately Alabama’s population is reported.

Take the Census anytime before September 30 at 2020census.gov.