Toure and Jackson are hurling accusations and insults at each other — over a $200 political ad that Jackson bought for his wife — in the Jubilee newspaper. However, Jackson says — the ad never ran.

“If you pay for something you expect the services that you paid for,” Jackson said.

“It’s $200 dollars. Rose Sanders is a millionaire. I’m just a po’ country district attorney. All I want is my $200 dollars back. Is that asking too much?” 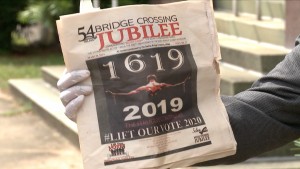 “He is so small minded that he is focused on this veiled threat, accusing me of a possible crime, me and my cohorts,” said Toure.

“This is just totally unacceptable. And I’m hoping that he will change or the voters will change him.”

Toure produced a newspaper page with an ad for Jackson’s wife on it — to show that the ad had run in the paper.

“As you can see this ad was printed in the Jubilee newspaper,” she said.

“If he would fail to investigate a simple matter as an ad in the paper when there are hundreds around — what does that say about his competency or his judgement investigating real crimes in this community.”

But Jackson says the ad that Toure has — is a fake.

Jackson’s wife Miah — is a candidate for Selma mayor in the October 6th runoff. Her opponent in the runoff is former mayor — James Perkins, Jr.