The Air Force football team will honor the Tuskegee Airmen with the 2020 edition of the Air Power Legacy Series uniform. The Falcons will debut the special uniform for the Navy game, Oct. 3, in Falcon Stadium. 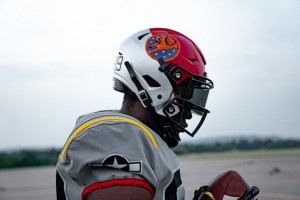 The uniform is gray with black lettering. The chrome base gray helmet features the P-51 aircraft flown by the Tuskegee Airmen with signature red tails and nose that helped identify the squadron. The helmet features the four squadron patches for the 99th, 100th, 301st and 302nd. The pants feature an authentic stenciled information graphic on the side. The custom nameplate on the jersey says Red Tails, inspired by hand-lettered names painted on the side of the P-51 aircraft.

This year marks the fifth season of the Air Power Legacy Series, started in 2016 to honor the Air Force’s rich history. The team honored the World War II Flying Tigers of the U.S. Army Air Corps that year, followed by the F-35 aircraft in 2017. The team honored the AC-130 in 2018 and the C-17 aircraft last season.

The Tuskegee Airmen were a group of African-American pilots from the U.S. Army Air Corps commissioned by President Franklin Delano Roosevelt in September 1940. The pilots began their training at Moton Field in Tuskegee. More than 900 pilots graduated from the program and more than 350 served in active duty as fighter pilots.

The first African-American officer to solo an Army Air Corps aircraft was Benjamin O. Davis, Jr., who became the commander of the 99th Pursuit Squadron, the first all-African American air unit. The Air Force Academy airfield was renamed in his honor in November 2019 and is now the Davis Airfield.

In early 1944, the 99th was joined by the 100th, 301st and 302nd to form the 332nd Fighter Group. They were the only African-American fighter group in the Army Air Corps and the only group to have four squadrons instead of three. Assigned the color red for identification purposes, the 332nd became known as the Red Tails and Red Tail Angels for the success escorting bombers into enemy territory.

The 332nd was credited with shooting down 12 German planes in two days in January 1944, flying more than 15,000 sorties and shooting down 112 enemy planes total. The unit earned 96 Distinguished Flying Crosses and three Distinguished Unit Citations. The success of the Tuskegee Airmen helped lay the groundwork for the civil rights movement and influenced President Harry Truman’s decision to desegregate the armed forces in 1948.

What the Tech? App of the Day: TouchRetouch