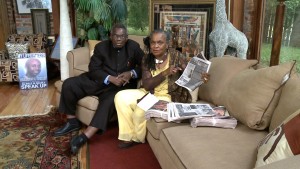 “I’m not angry. It saddens me almost to the point of tears,” said Toure.

“I’m not angry either. I’m mad,” said Sanders. “He has accused of crime when there was no crime committed. That’s not only inappropriate for a district attorney, that’s criminal.”

Jackson’s comments stemmed from a $200 political ad — that he bought for his wife in the Jubilee newspaper — that he says never ran.

But Toure says Jackson is looking for the ad — in the wrong paper. She says the ad ran in this year’s 2020 edition of the annual paper — but he’s looking for it — in last year’s 2019 edition.

Toure and Sanders founded the annual Bridge Crossing Jubilee back in 1992. And Toure served as coordinator of the event for nearly 30 years.

The couple is demanding a retraction from Jackson — and an apology.

“I think, it’s criminal what he has done,” said Sanders.

We reached out to D. A. Michael Jackson for a response.

He said now that everyone has had their say concerning the matter — he will not be issuing any further public comments.