Two law enforcement officers in Dallas County have been indicted on several charges. 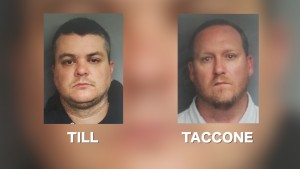 Till and Taccone are facing a felony charge of assault in the second degree, and two Class A misdemeanor charges of unlawful imprisonment, and obstructing governmental operations.

District Attorney Jackson said the charges stem from an excessive use of force incident that occurred on April 30 near the Crossroads Exxon at the 2700 block of Highway 80 West in Selma.

Additionally, the U.S. Department of Justice said on September 25, Till pleaded guilty to three felony counts of obstruction of justice by corrupt persuasion of a witness related to the same incident on April 30.

The Department of Justice said Till used force against a citizen while on duty as a Selma police officer. On multiple occasions thereafter, Till instructed a fellow law-enforcement officer not to say anything to anyone – including a federal agent – regarding a phone call Till received from his wife shortly before the use-of-force incident.

The DOJ said Till admitted that he gave those instructions with the intent to hinder, delay, or prevent the communication to a federal law-enforcement officer of information relating to the possible commission of a federal civil-rights violation.

As part of his plea agreement, Till will no longer be able to work in local, municipal, state or federal law enforcement, not as a corrections officer or private security guard.

Till’s scheduled sentencing is set for December 28, 2020. He faces up to twenty years in prison.