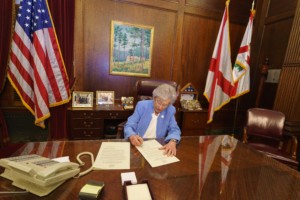 Gov. Kay Ivey has announced a proposed site for a new state prison in Elmore County. In a statement today, she said the location that has been selected near Alabama Highway 229 and Rifle Range Road.

It is one of three mega prisons that are planned for the state.

“As stated in the Request for Proposal, the ADOC intends to enter into long-term lease agreements for these three facilities,” Gov. Kay Ivey said in a statement. “As such, the confidential negotiation period will continue to ensure and secure the best possible value for the state. The ADOC anticipates construction to begin in early 2021 and that approximately 3,900 construction jobs will be created in Elmore County,” she said.

She says financial details could be released later this year.