The municipal runoff elections are Tuesday — and there are six races in the city of Selma.

Voters are about to choose four new city council members — a new council president — and a new mayor.

Former mayor James Perkins Jr — and Councilwoman Miah Jackson are vying for the mayor office in the runoff. 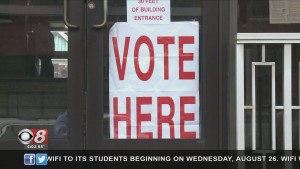 During the municipal election — Perkins won 45 percent of the vote — and Jackson won 29 percent.

In addition, the race for council president is between Warren “Billy” Young and Lydia Chatmon.

There are also runoffs — in four city council wards.

“I think every body’s voice needs to be heard,” said Sierra Grant.

“It’s your right to vote, so you should use your right, so, to vote. Cause it helps out. Everyone’s voice should be heard.”

“So many people fought so hard for us to even have the right to even walk up there and vote you know. And, it’s just very important, said Nathaniel Cole.

“You want the right people in charge.”