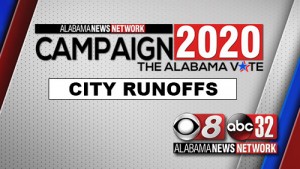 When the final unofficial results were announced, two local incumbent mayors lost their re-election bids. Both of them serve cities in Tallapoosa County.

Meanwhile, Tuskegee Mayor Tony Haygood won his bid for another term in office, defeating challenger Rozell Chappell, Jr. Haygood had 1,064 votes to Chappell’s 947, for a margin of 53% to 47%.

Other cities had no incumbents in the runoff. In Selma, James Perkins beat Miah Jackson to replace outgoing mayor Darrio Melton. Perkins got 4,001 votes to Jackson’s 2,164, for a margin of 65% to 35%. Perkins had been mayor from 2000-2008, becoming the first Black mayor in Selma history.

Stay with Alabama News Network for all of your Campaign 2020 election coverage.